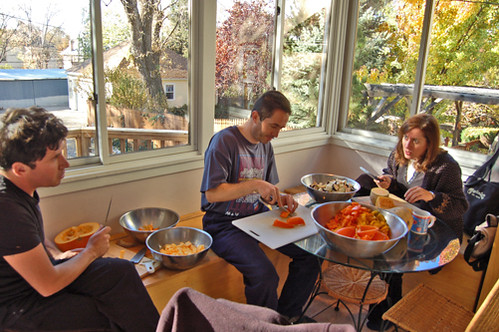 A good friend of mine has just become an Assistant Principal (Vice Principal), which was probably one of the best jobs that I have ever had.  Often you get to help guide the direction of the school but you still have many opportunities to be in the classroom and connect with kids, more so than a principal.  That being said, I believe that a principal can still connect with kids in many ways, but in my experience, they have a lot more meetings and have to be out of school a lot more.

I have been blessed to have worked with an amazing principal who had taught me a lot and even though we would argue (a lot), it was always about figuring out what was best for the school.  To be honest, he encouraged the push-back because he cared more about “what was right” as opposed to “being right”.  My two years with him was probably one of the best learning experiences that I have ever had and I still connect with him all of the time when I need help because he always focuses on what is best for kids.

On the other side of the coin, as a school principal, I was blessed to work with amazing vice principals who pushed me to be better.  They challenged me to be better, but they were also sponges.  They were always open to learn and develop; not only from what I would share to them, but from the experiences that they had with staff, students, and parents.  I expect (these are non-negotiables) that administrators focus on building relationships with the entire school community, are approachable, are change agents, and ALWAYS have the idea of “what is best for kids” driving their decision-making.  My “administrative team” colleagues have had these qualities in spades.

Thinking about the work that I have seen from many staff in Parkland School Division, here are some of the other qualities that I noticed the most successful ones have all had:

1. Self-starters – There is often a misperception that a principal should be delegating tasks to the leadership team and I guess sometimes this does happen.  With that being said, I rarely had to ever ask my leadership team to do anything because they were already jumping on every opportunity to do different things for our school.  One of my proudest days as a principal was when our school started “Identity Day“, not only because it was such a great day for our school community, but this was an idea that was started and lead by my assistant principal.  Not only did she come up with the idea, but she worked with every single grade to ensure that the day was a success.  Being able to be actively lead initiatives and work alongside teachers gave them instant credibility.

They did not only do the “fun” jobs, but my assistant principals jumped up to take on some of the boring stuff to ensure that we would all work together to better their school.  Did they love doing that work?  Probably not.  But they knew what my strengths and weaknesses were and we would do things that would compliment one another as opposed to say “that is a job for the principal”

2. Determined to work towards success. – I have always been adverse to say things such as, “I am okay with failure”, because of the people that I have been blessed to work with.  I think of Jesse McLean and “Innovation Week“.  When he shared his thoughts with me about the week he was determined to make it a success, yet I know there were a lot of challenges that he, his admin team, and his school worked through to make the day a success.  When I think of “failure”, I think of it as a step towards success, as opposed to something that determines success.  Things may not be perfect, but I know that some of the people I look up to work extremely hard to make whatever they do the best possible.  Failure is not finite, but a bump along the way.

3. Always takes ownership when things go wrong, but always gives credit when things go right. – When I think about “Innovation Week” and “Identity Day“, what was humbling was that the people that lead these initiatives gave ALL of the credit to others even though they were the catalysts for the ideas.  They repeatedly acknowledge the hard work of the staff and said nothing of their part.  On the other hand though, if things would have failed or there would have been trouble, they would have owned that and not blamed others.  What that shows me over and over again, is that they are more worried about what is best for kids and the well-being of staff.  They carried a lot of weight on their shoulders yet they gave credit so much to others.  Not that it wasn’t deserving (because it absolutely was), but their focus was on the team and not themselves.  Still, they knew they had to do their part to make sure it was a success.

4. They will challenge authority.– I will never forget my interview to become an Assistant Principal with my soon-to-be boss.  We actually got in an argument during the interview and I thought that I would have no chance to get the job.  A few days later, he called and offered me the job.  What he had told me was that he did not want me to say “yes” to everything that he had said, but to push against him when I disagreed.  He did not want to go in front of the staff and say something that was ridiculous while I just simply watched him and disagreed in my head.  Again, he focused on what was right, not being right.  This did not mean that he agreed with everything that I said when I did challenge him, but he always tweaked his ideas based on my feedback.

When I hired my AP, this was a quality I knew that she had because she had pushed me as a teacher when I was an administrator.  I knew she was always focused on what was best and I learned so much from her challenges that I thought there would be no better hire.  If you are looking for someone to just agree with everything you say as an administrator, then you are better off hiring no one.

I was spoiled as both a Principal and Assistant Principal to work with amazing people that helped me to be successful.  I learned a ton from them and they were people that were extremely talented, trusting, yet were sponges; they always wanted to learn and grow.  With those that I have worked with, they have taught me that these qualities they possessed were not only for “administrators”, but are something that you should expect from others in your organization as well.  As an administrator, you sometimes have to make some tough calls, but if you are open to working with your administrative team and build trust with your school, those decisions become easier.

As I write this, I worry that many people new to administrative teams will think that simply implementing these ideas with their “boss” will lead to success, which is not true at all.  Leaders of organization would have to be open to these things, but in my opinion, if they are, their schools will be much more successful.  The collaborative approach to school leadership (not just administrators, but whole school) is more likely to lead success for kids than would an approach based on one.  I am hoping that the “top” of organizations would think about these qualities that I have listed and think about how they create an environment to ensure that these qualities can flourish.

If you are not open to learning from others in your building as “the leader”, will you really be able to create an environment where students and staff excel?

I am a learner, educator, and Innovative Teaching, Learning, and Leadership Consultant. I am also the author of "The Innovator's Mindset" and "Innovate Inside the Box." I believe we need to inspire our kids to follow their passions while letting them inspire us to do the same.

Get your copy of “The Innovator’s Mindset” and “Innovate Inside the Box“!

Get your #InnovatorsMindset merchandise here!